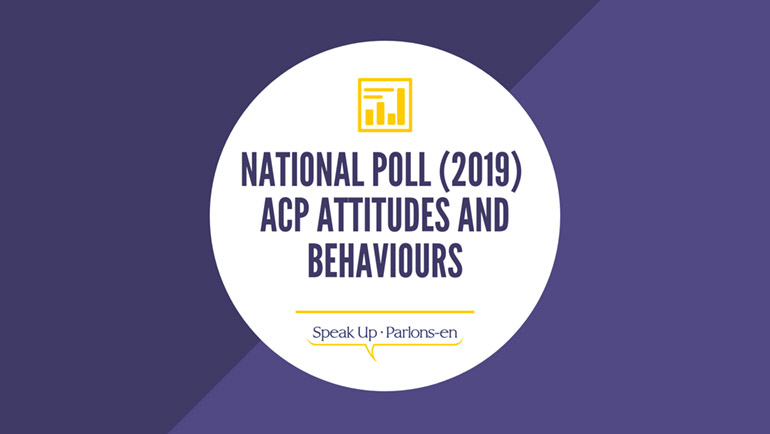 OTTAWA, July 30, 2019 – A national poll was commissioned by the ‘Speak Up’ Advance Care Planning in Canada initiative to identify people’s current attitudes and behaviors towards planning for their future health and personal care. People in Canada were asked about Advance Care Planning, which includes reflecting on and talking about their wishes for future care in the event they have a serious illness or health crisis. Respondents identified what makes it easier to have a conversation about their wishes and what makes it tough to plan ahead. While attitudes towards Advance Care Planning are overall positive, behavior has not followed; eight in ten Canadians have given end-of-life care some thought, but less than one in five have an advance care plan.

The poll, conducted by Nanos Research in February 2019, was released to national, provincial and territorial stakeholders to support them in developing strategies to raise awareness and encourage people in Canada to move from thinking to doing. An infographic illustrating some of the key findings is available on Speak Up website.

Mary Ann Murray, the Project Director of the Speak Up initiative, says “Advance Care Planning can provide solace to your family and loved ones. Helping them to understand and know what you would want enables your voice to be part of conversations even if you can’t speak for yourself. It is more than thinking about end of life care; sometimes the unexpected happens and for a brief period you can’t speak for yourself.” Having conversations about your wishes is part of thoughtful life planning and helps prepare your Substitute Decision Maker(s) and health care professionals to make future decisions about your care that are right for you.

The survey also asked people in Canada about discussing their care with the following and found that the majority of them said that it is important or somewhat important to talk to:Family: Nearly three quarters of Canadians (74%)

When asked when to plan, 36 percent of respondents said when they are healthy, 28 percent when they are making their will and 11 percent when diagnosed with a serious illness. On average, people in Canada say Advance Care Planning should start when a person is in their late 40s.

Progress has been made

A previous survey was conducted in 2013 by the CHPCA about Advance Care Planning. A comparison of results shows significant progress has been made in shifting attitudes towards stating future personal and health care conversations. The 2019 survey found that 80 percent have thought about Advance Care Planning – up from 74 percent in 2013. Most say it is important to talk about ACP with family and friends (93% vs 44% in 2013), health care providers (80% vs 51% in 2013) and a lawyer (66% vs 36% in 2013).

Chad Hammond, the Project Manager of the Speak Up initiative, says “There seems to be a growing interest globally in having these conversations earlier and with more people, but also shared concerns about finding time, support, and resources to aid in broaching the topic. The attitudes and behaviors expressed within the 2019 poll mirror similar national polls conducted in the United States, Australia, and New Zealand within the last couple years.”

Most frequently people in Canada report not affording a lawyer can make it more difficult to plan for their future care. The poll found that 31 percent of people in Canada need more information about Advance Care Planning and 12 percent are not encouraged by their loved ones and family to prepare a plan. However, the majority reported that resources, support and more personal time would make it easier to have a conversation about their future care.

The ‘Speak Up’ Advance Care Planning (ACP) in Canada initiative is led by the Canadian Hospice Palliative Care Association (CHPCA) with a financial contribution from Health Canada. The initiative aims to help people living in Canada prepare for their future and personal health care. The project involves a series of public awareness campaigns, supports community-based ACP programs, and promotes ACP resources and guides.

Nanos Research surveyed 2,948 Canadians, 18 years of age or older. An online survey conducted in February, 2019. The poll can be found on Speak Up website. – Results available by Jurisdiction.